Senator Mike Moore joined us in studio today.  We talk about the legislature’s pay raise, current comittees, the “Bathroom Bill” and the senator’s bill to bring fairness and empowerment to victims of assault on college campuses. 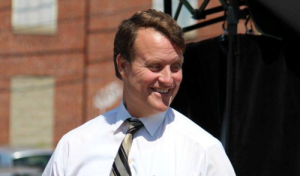 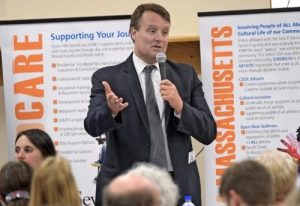 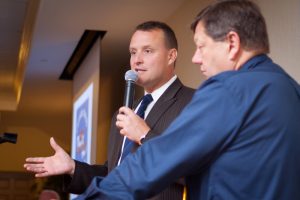 Senator Michael O. Moore (D-Millbury) was elected to represent the people of the Second Worcester District in the Massachusetts Senate in November 2008, earning 60% of the vote. Senator Moore represents the Towns of Auburn, Grafton, Leicester, Millbury, Shrewsbury, and Upton, as well as Precincts 2 and 4 in the Town of Northbridge, Wards 5-7 and Precincts 1 and 5 in Ward 8 in the City of Worcester.

Born and raised in Millbury, Senator Moore has devoted his entire adult life to public service. A former law enforcement officer, environmental investigator, and town selectman, Senator Moore has an accomplished record of giving back to his community.

A graduate of the Waltham Police Academy, Senator Moore began his 22-year law enforcement career as an Environmental Police officer working for the Department of Environmental Police, eventually becoming an investigator in the Massachusetts Attorney General’s Office. He holds a Master’s Degree in Criminal Justice from Western New England University.

Elected to the Millbury Board of Selectmen in 2001, Senator Moore served three terms improving the quality of life in the town where he grew up. In 2004, during his tenure on the Board, The Shoppes at Blackstone Valley – the largest economic development project in Millbury history – opened, expanding the town’s commercial tax base by approximately $1 million annually. He was overwhelmingly re-elected to the Board of Selectmen in 2004 and 2007.

In 2005, he was appointed Assistant Deputy Superintendent at the Worcester County Sheriff’s office, where he oversaw the Community Service Program, inmate reintegration program, and senior citizen community outreach safety programs. Under his leadership, the Sheriff’s Office created the Worcester County TRIAD senior citizen program, working to identify and address senior citizen safety concerns in individual towns throughout the county with programs that include house numbering, 911 Cell Phone Bank, Beacon of Light, File for Life, and many more. Senator Moore was also responsible for the development of the Area Law Enforcement Response Transmission (ALERT) program, which sends a daily email out to law enforcement officials on recently released inmates, and the Responsible Fatherhood Initiative, a Department of Revenue sponsored program that confirms parenthood of inmates to reduce welfare fraud. The Community Service Program saved Worcester County cities and towns over $3.8 million in labor costs under his leadership.

Immediately upon taking office in 2009, Senator Moore declined to take a pay raise given to members of the Legislature, believing it irresponsible to accept a raise for a job he had not yet begun, especially given the dire budget situation facing the state. Since being elected to the Senate, Senator Moore has worked hard for the residents of the district, filing legislation to protect nurses and other health care workers from assault, securing funding for various area transportation projects, amongst other efforts.

Senator Moore also serves on various boards and legislative advisory committees advocating for issues such as higher education, Central Massachusetts or issues of importance for the Commonwealth of Massachusetts. Currently, Senator Moore serves on the Advisory Board for the Dr. Lillian R. Goodman Department of Nursing at Worcester State University, is the Senate Chair of the Central Massachusetts Legislative Caucus and is a member of the Council of State Governments’ Eastern Regional Conference’s Education Committee. Senator Moore also serves as the Co-Chairman of the Council of State Governments’ Intergovernmental Affairs Committee, is member of the New England Board of Higher Education Legislative Advisory Committee and serves on the Council of State Governments’ Federalism Task Force .

Senator Moore lives in Millbury with his wife, Ellyn Lazar-Moore, who is an Assistant District Attorney in Worcester County. Senator Moore and Ellyn have two children, ages 12 and 9