4.15.19 Latest on Conversion Therapy in MA and QFlix interview with James Duggan

Posted On April 15, 2019 By Radio Pride Leave a Comment on 4.15.19 Latest on Conversion Therapy in MA and QFlix interview with James Duggan Posted in Political, Weekly Podcast

On today’s show we review the latest path of the Ban on Conversion Therapy in Massachusetts.  We also re-air the interview with James Duggan of QFlix as we prepare for it’s third year in Worcester. 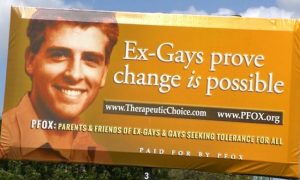 An opponent of conversion therapy held up a sign while lawmakers and advocates waited for the start of Tuesday’s hearing before the Committee on Children, Families and Persons with Disabilities. [Photo: Kaitlyn Budion/SHNS]

Supporters of the ban say conversion therapy has the potential to harm vulnerable young people who are gay or are dealing with issues related to their sexual identity, by shaming them and potentially driving them to depression or drug use.

The ban does not address conversion therapy performed on adults, nor does it apply to pastoral counseling by a religious leader.

Fifteen states and Washington, D.C., have already banned conversion therapy, according to the Human Rights Campaign.

This will be the third year QFlix has come to Worcester, it’s first choice once they expanded beyond Philadelphia.

The opening for submissions start next month, so now is the time to start to think about getting your Films ready to go!